Witchhazel is a fall blooming, deciduous large shrub, with strong autumn and winter interest due to it’s late bloom that occurs between fall and winter. The showy, streamer-looking flowers vary from bright yellow to hues of orange. Witchhazel leaves, twigs, and bark were used traditionally to treat cuts; as well as skin conditions such as rashes and insect bites. Witchhazel is a species with high wildlife value, as it’s a food source for many species of moths and butterflies, and birds such as wild turkeys eat the seeds. For a long time it was a mystery how witchhazel was pollinated, until naturalist Bernd Heinrich realized there’s a type of Owlet moth active on cold nights (similar to the one pictured above). These moths hide under the insulation of the leaf-litter during the day, then at night have the ability to raise their body temperature by as much as 50 degrees by shivering – allowing them to go find sources of nectar.

At Direct Native Plants, we take many precautions to make sure your plants will arrive in the best condition possible.

Our perennials are grown in a 4” quart-sized pot. These plants are then cut back to fit our packaging, placed in a protective clamshell container (made from recycled materials), and then shipped to you in a cardboard box.

Trees and shrubs are grown in a 7” tall container (referred to as a 1-gallon pot), and depending on the species will be between 12” and 36”. We bag the root section of these plants to prevent them from drying out in transit and ship them in a tall cardboard box. PLEASE NOTE: These boxes can be shipped in bundles up to 6. After that we start a new package, so keep this in mind if you’re trying to get the best shipping rates.

Direct Native Plants supports the United States Postal Service, so your plants will ship via USPS Priority Mail. Orders ship out Monday through Wednesday of each week, and depending on how close you are to our nursery in Maryland, shipping will take anywhere from 1-4 business days. 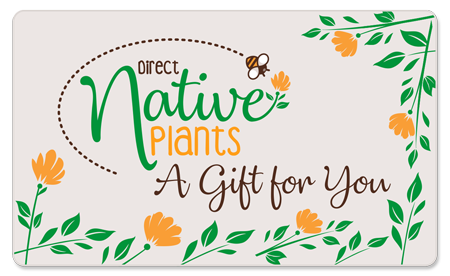